A beautiful rainbow maker featuring the Green Man image, a symbol of rebirth and protection, with a green crystal cascade, finished with a Swarovski® Spectra 3.8cm crystal icicle.

The Green man has been traced back as far as four thousand years and has been linked in  folk tales with “Jack in the Green”, ” John Barleycorn” and even “Robin Hood”. Every “Green Man” is different in the way the designer or the age interpreted him but the message of his image is always the same, that there is life after death. Thousands of Green Man designs were created all over the world long before communication could have influenced the earliest copies which bears testament to a strong and long held belief. 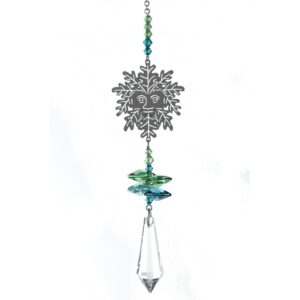