Jet has been used as a talisman since Stone Age times, used in olden times to protect from “entities of darkness”. Jet draws off negative energy and alleviates unreasonable fear. Jet is actually formed from fossilised wood but looks like coal. It is a stone of protection when worn around the neck. Those attracted to Jet are said to be “old souls”. It can also be used to open to psychic experiences and to assist the quest for spiritual enlightenment. Jet is said to stabilise finances and protect businesses. It can be placed in the cash drawer or the wealth corner of the house. Jet promotes taking control of life and balances mood swings and alleviates depression. It cleanses the base chakra and stimulates the rise of kundalini force toward the crown chakra. Jet treats migraines, epilepsy and colds. It helps diminish glandular and lymphatic swellings and heals stomach pain. Jet was traditionally used for menstrual cramps.

Tumblestones are tumble polished to a high degree to form attractive smooth rounded stones which are comfortable to hold and stimulating to the senses. There is no strict rule on what should be done with tumblestones although they are traditionally used as healing stones.

Be the first to review “Jet Tumblestone” Cancel reply 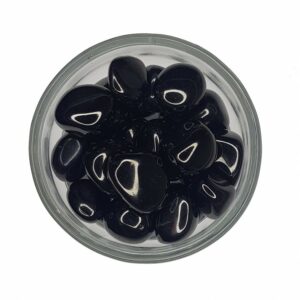