Tea Tree Essential oil, (Organic 10ml by Star Child)  is one of the best first aid oils of aromatherapy. It can be used to fight a variety of bacterial strains, virus infections such as herpes simplex, as well as fungal disease such as candida and athlete’s foot. It also stimulates the immune system and thus supports the body’s own defences. It is an excellent oil to have around as a preventative during the cold season and can be used as a first line of defence at the slightest sign of micro-organismic attack. It can be applied neat to the skin to treat Herpes and Shingles, insect bites and skin infections. It may also be used for colds and flus and any congestive conditions of the upper respiratory tract. Use with caution.

History and Mythology
Tea Tree oil is relatively new to aromatherapy, but what an impact it has had since its debut. Tea tree is without a doubt one of the most widely used essential oils, and one of the most universally useful as a first aid remedy. A member of the Myrtle family, like Niaouli and Cajuput, it grows in the swampy areas of Australia. It was first discovered by Captain Cook and his crew. However, they were not terribly specific with their name-giving and allocated the same name to several species they came across on the basis that they were all palatable as tea-substitutes. Tea-tree, however, is in no way related to the plant we usually derive our brown brew from. Captain Cook and his crew soon learned the medicinal used of this tree from the Australian aborigines, yet it took several hundred years before this amazing oil became widely used in the West. This is probably because it does not have a particularly pleasant scent. It smells rather medicinal and somewhat harsh, so it never became popular as a perfume oil. However, studies have shown Tea tree to be effective against a wide range of bacteria, viruses and fungal infections, which is why some consider it a first aid chest in a bottle.

Magical Use:
Tea-tree oil can be used for cleansing and protection. It is particularly useful for warding off the demons of disease and can be used for healing rituals and as a room aroma in a sickroom. It is decongestive and may help to clear energy blockages.

QUALITY AND PURITY
We only supply the finest quality essential oils certified for Aromatherapy use. This assures that during the process of extraction, handling and bottling our oils receive all possible care and attention, and that the highest quality and purity is maintained throughout the preparation process.

SAFETY **
** Pure essential oils are highly concentrated substances that should always be treated with due respect. Organic oils naturally are the purest oils available. 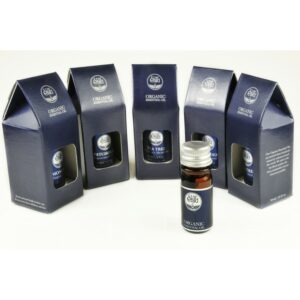